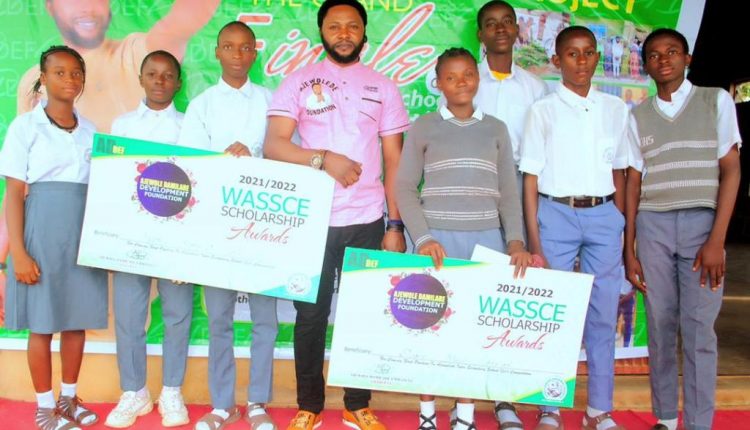 Kwara State ANCOPSS Chairman ready to partner with the Foundation

Engineer Ajewole Damilare who believes so much in the quality education of citizens which is the best legacy from any reasonable individual has taken it upon himself and his foundation to empower students in Kwara state.

The maiden edition of the empowerment was carried out at Omu-Aran High School complex in Irepodun Local Government of the state recently with several dignitaries in attendance.

Meanwhile, the number of students who could not afford the examination fees which is becoming an issue in the state was what prompted his move to give the opportunity in the State, especially in Irepodun recently where he gave scholarships to some students after a quiz competition exercises throughout the region.

Engineer Ajewole who is the founder of Ajewole Damilare Development Foundation in collaboration with All Nigeria Conference of Principal of Secondary School, ANCOPSS conducted a quiz competition to the students; where some of the students were given scholarships in payment of the coming WAEC, NECO and JAMB payment to the first, second and third position of the successful schools respectively.

The founder of Ajewole Development Foundation, Engineer Ajewole Damilare Emmanuel, in his remark on the final day of the competition lamented on the decadence and poor education in the country due to financial incapability of some parents which has led many promising young students to become not just dropout but vagabonds in the society.

He recalled how he was bullied and stigmatized because he could not secure a chair and school locker when he got admitted into secondary school.

“I was waiting for my brother to finished his secondary school so that I could make use of his locker but when I had the opportunity to be admitted into secondary school because of my performance which led me to a double promotion; I had to sit on the floor each time we have a full student in the class, especially during an exam in my first year in secondary because my brother was yet to finish then.”

“This and many other things are what bothers me so much and prompted my desire to empower as many students as possible in our society.”

Engineer Ajewole, however, accepts collaboration from well-meaning and passionate individuals or corporate entities to aid his vision which will eventually help to educate many students in the society.

In the same vein, the Chairman of Kwara State chapter of ANCOPSS, Alhaji Toyin Abdullahi was present at the grand finale of the competition. He expressed his profound gratitude to the organizer of the program who has taken it as a priority to aid the development of education in the state.

In his statement, he lamented on how the education sector has been neglected and pushed aside in the country which has brought about the setback in the country as a whole. He however expressed his appreciation for the initiative by the young engineer.

“I want to say that we are very proud to associate with your Foundation in this regard.

It is a very long time we have seen or witness something of this nature happening in our education environment; unlike in the past, that this kind of competition and other similar ones are common to ginger our students.

You are doing this without holding any political position or power but out of your passion and desire to give back to the society that nurtured you.

I want to say that ANCOPSS is very proud of you and would not hesitate to partner and give you the desired support in other to do more” He said.

He however commended the step taken by the pioneer of the event adding that the association would be glad to partner with the foundation in their future endevours. He also appreciated that it was not a politically motivated event rather, a passion for educational development which is a move in the right direction.

Meanwhile, Comrade Taiwo Edungbola, the Chairman of Irepodun Local Government chapter of the Nigeria Union of Teacher (NUT) appreciated the students and participating schools for their patience, efforts, and commitment toward the success of the programme which he admitted was a good move towards educational development and encouragement to the students and their parents.

He, therefore, charged all the students to be focused and more serious with their studies adding that such opportunities would be opened to many of them in the coming period.

The programme recorded a very huge success as many principals, teachers, parents, and students from different schools were in attendance.

Also, several other gifts were given to many participating schools

Engineer Ajewole however appreciated all attendees for their patience and support adding that; it is just the beginning of a good thing to come for the students in Irepodun and Kwara state as a whole.

Why The Church Is No Longer Making Impact, Pastor Afolabi