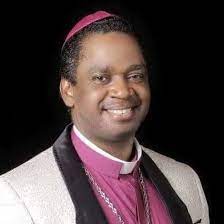 says, “there was a time that I ate flours that have dead maggots inside.”

The Creator of the first Blockchain Main Net in Africa, Archbishop Sam Zuga has revealed to the world that he doesn’t have a bed of his own or a place he could call a house of his own.

He made this known today, first of August at a programme where he explained why he can never scam anyone for any reason. This became imperative due to the rumour on his effort to create financial freedom for everyone in Africa especially Nigerians.

Speaking at the event, the Bishop, Prof. Sam Zuga recalled how he lived in poverty and penury before he got liberated; which is why he has the burden to make everyone in Africa rich through the introduction of a digital currency called SamZuga Coin.

Archbishop Sam Zuga made the statement in reaction to the rumour of scamming people with the idea of Samzuga coin. He said he does not have any reason to scam anyone because he is not doing anything for his comfort as he doesn’t live a flamboyant life.

“I don’t have a house, I don’t even have a building foundation yet; where will I run to. As old as I am, what am I looking for, what am I scamming you to do?” he quarried.

In his word, Prof. Sam Zuga said, he had at one time cried because he saw someone who threw away the heads of fish because she doesn’t see any value in them. Though his meal then was flour that has dead maggots on them.

“There was a time that I ate flours that had dead maggots inside. So, seeing a woman, throwing away the head of fish which she cut made tears rolled from my eye. So, I looked and said Lord, help me at least, if I decide to eat something, help me to get it. I don’t want much but anything I want to eat. It is the prayer that I have prayed and today, I am eating what want to eat.” He said.

Bishop Sam Zuga stated that he is struggling and not able to sleep day and night; just to liberate men and women in Africa, not because he is lacking but because he wants everyone who would buy into the innovation to become financially free.

“I am struggling and having sleepless nights, not because I am lacking. What I have spent today alone can take care of my food for the next two years.” He said.

He lamented that some people thought he wants to scam them because they are yet to understand his vision.

He however stated why he is struggling to make everyone financially free adding that, he knows how difficult it would be to achieve such a vision.

“What am I looking for? Please help me tell these people that I am not a scammer. I am only trying to make you be like me. I am not like them. I don’t want you to struggle to do anything in life. I hosted you today and I didn’t borrow any money from any bank and I am still comfortable. So, I want you to be like that too.”

Meanwhile, according to Leadership online; the first Blockchain Main Net in Africa was successfully launched on Wednesday, July 7, 2021, to Samzuga Family worldwide and Nigerians.

This is according to CEO of ZUGACOIN Archbishop Prof Sam Zuga through Mrs. Marvelous, the Director-General of the famous African cryptocurrency.

“The unveiling of the first Blockchain Main Net in Africa is just the beginning of the journey out of slavery from the white supremacy and the recovery of our lost self-esteem. Africans should begin to think inward and not outward again. Enough is enough. We can do it.

Africans should not behave the way the Israelis did, they left Egypt but Egypt didn’t leave them and they ended up wasting in the wilderness. People that left Egypt, only two entered the promised Land. Many Africans believe that they can’t do without the white and whatever is done by an African must be substandard, let us stop this mentality,” Samzuga stated.

Samzugacoin Blockchain Main network And Zugacoin (Zugascan) Explorer, is the first Blockchain Network created from Africa by an African and for Africa tech space.

With this latest technology, Developers can leverage the network interoperability to build their Blockchain projects by Applying for Zugacoin’s API.

In addition, Zugascan was also launched to serve as a Block Explorer and Analytics Platform for Zugacoin, a decentralized smart contracts platform.