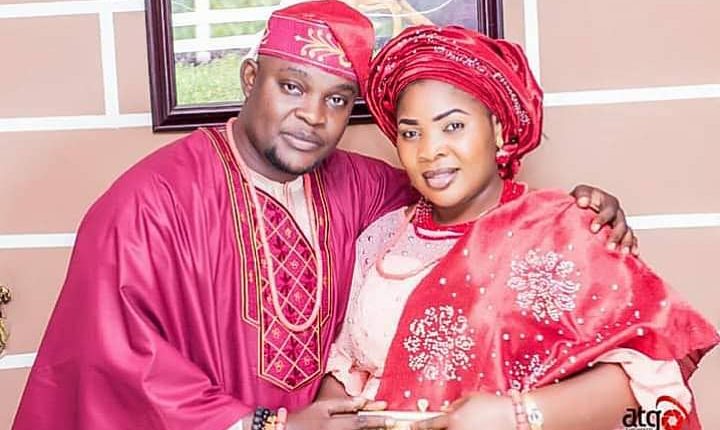 …says “Some people blatantly said I was impotent”

It is no longer news that the Word of God is “Yea and Amen”, and He is a Rewarder of those who diligently seek Him; which was why a shout of joy rented the home of Evangelist Olayimika, popularly known as Atabatubu, a renowned Air personality, and Musician, as God gave his wife a set of twin after a decade of waiting upon God. In felicitating with him and getting to get the details of the good news, Golden Heritage Newspaper Correspondent made her way to the office of this skillful Producer, who did not hesitate to testify to the goodness of the Lord, here are his words;

Can I officially meet you, Sir?

I am Dr. Evang. Olayimika, Atabatubu the great, Abere Orin,

10 years of packaged Shame, waiting. It is not 10 months nor 20 weeks. The waiting period is not palatable, every newly wedded couple expects their child the following year, but God proved to us that He is all-knowing. What has been in mind since we’ve been waiting is that whatsoever my God cannot do for me, it should remain undone forever.  The book of Hab. 2:3 helped me a lot. I can’t say verbally how it all went, but above all, it all ended in praise.

“I didn’t give room for manipulation like the case of Sarah and Haggai.”

How were you able to hold on the forth when tongues were wagging and even your wife’s complaint?

I want to give God all the glory because no man can get anything, except it is being given by God.

I thank God for the priceless grace that I have, due to the nature of my job as an entertainer,

I have many sides of me, I’ve been able to tune myself to any part I want to, I shouldn’t be seen unhappy due to the nature of my job, I’m always happy, though I cried and do cry.

I released an album upon the birth of my twin that expressed how I felt then. Pressure from family, wife, I go to location for days, but I’m grateful to God that my wife understands the kind of job I do. We celebrate others despite our situation, through the help of God.

Was there any time you were considering other options?

Yes, they were times!

Other options were introduced to me at some point by people very close to me, that I never imagined could propose such, but I never accepted them. There was an album I released after the wedding tagged prayer point that showed what I was going through then. But people never understood it; it’s just getting clearer to them now. Some people blatantly said I was impotent, they tried me with different ladies, thank God for room service, and the grace to stay, and I’m proud to say that my wife didn’t adopt, we patiently waited for it.

Now that the babies are here, it is more responsibilities on your side, how do you intend to joggle them.

One thing you need to understand is that we’ve been preparing for it. Though the nature of my Job might demand me to be outside for a long since I’m still around, I’ve been able to help and also assist my wife, plus grandma is still around.

Was there a particular period God specifically told you the reason for the waiting and when He will be doing it?

He never told me I will be waiting this long, but He has named the male child before His arrival, and he is not a man that He should lie, neither did He say another woman will give birth to the child. I didn’t give room for manipulation like the case of Sarah and Haggai. Thank God Isaac was the covenant child; I’m not perfect, but I waited for the covenant child.

I know I will be having a boy, I’ve seen him we do talk.

There was a time we were praying in my sitting room, I busted into speaking in tongues, and the atmosphere changed, I saw the boy crawling towards my frame in the sitting room in the spiritual realm, and I said it out. My wife was seriously emotional that day. All of that assured me that God will do it because if it is good, it is God; and if it is God, it is good.

Words for those waiting out there?

Some people are waiting upon God with certainty that they are fit because of the level of fertility that exists in their lineage; but I will tell them due to what we eat, and the stress we go through, they shouldn’t be too sure of themselves. They should treat themselves both medically, and spiritually. I’ve gone through a lot of medical steps. There was a time my wife was asked to take a break from her job, due to the stress involved like her printing job, still, there was no result, but it was that uncomfortable year, the year 2020 that she took in. God did it for me, and I know He can do it for everyone. Don’t be too sure of yourself; you might be fertile in the morning, but infertile in the evening. Treat yourself medically and spiritually.

“I shouldn’t be seen unhappy due to the nature of my job, I’m always happy,”

Also, go and consult God yourself, let Him talk to you the way you will understand and you be sure of great result I prayed before starting the marriage, and I was made to understand that there will be war, but I never knew it would be this waiting. So many other things aside waiting in the marriage happened, but God’s name is praised.

COVID-19 Is A punishment from God -Cleric

2021 Jubilee: How God Exposed Kidnappers In Our Church -Pastor Shodeinde

I Am The Only Speaker Who Professes Jesus Christ -Honourable Oleyelogun